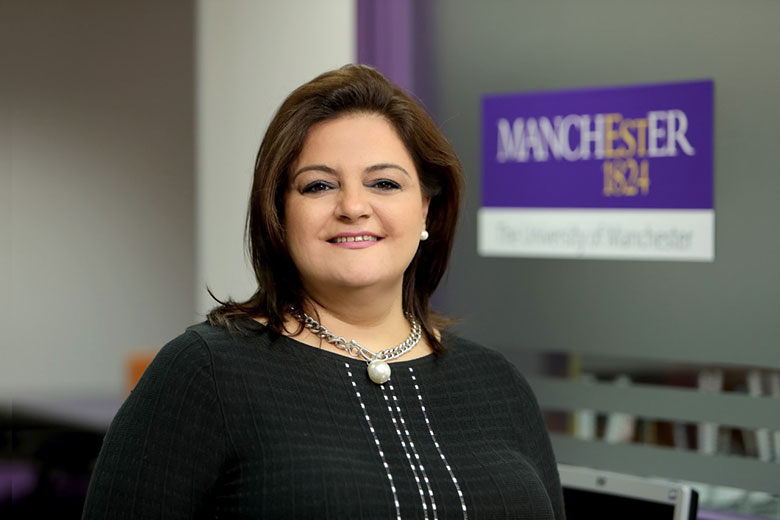 Randa Bessiso, Founding Director of the University of Manchester’s Middle East Centre in Dubai, in 2006, has been included in the list of Most Influential Arabs 2022, published by Dubai-based Arabian Business magazine. Ms Bessiso joined the curated list of 100 public figures, CEOs, founders and presidents, educationalists, financiers, healthcare leaders and entrepreneurs, from across the region.

Ms Bessiso was also named in the Arab Power List 2021, and among the 30 most influential women in the Arab World 2019, also published by Arabian Business.

Randa Bessiso believes in the power of continuous education to transform lives for the better and has been deeply involved with learning and development throughout her entire career. A Lebanese national of Palestinian origin, Ms Bessiso is the Founding Director of the Middle East Centre for The University of Manchester, established in Dubai in 2006, which is now the largest and fastest-growing in the University’s international network.

She is also responsible for regional engagement across governments, corporate strategic talent partnerships and social responsibility programmes, as well as collaborations with industry groups, government and professional bodies. Today, the Middle East Centre has supported over 3,000 part-time Master’s students in the region making it one of the largest professional communities of its kind in the region.

Before joining the University, Ms Bessiso was already involved in higher education as the regional lead for the UK government’s UK eUniversities Worldwide programme. Before moving into education, she was Vice President at PROJACS International (professional management and consulting services) in Kuwait.

Randa Bessiso’s success as an influential female leader has been highlighted with a number of regional recognitions, including annual inclusion in the Forbes Middle East 100 Most Influential Women/Most Powerful Arab Businesswomen lists, from 2014 to 2018. She was also included in the Arabian Business annual Arab Power List 2021 and was also named among the 30 Most Influential Women in the Arab World by Arabian Business in 2019. Ms Bessiso is a regular media commentator and speaker at executive forums in the UAE on her special area of interest – women in business.

Commenting on the recognition, Randa Bessiso said: “It is gratifying to be recognised with inclusion in this list of distinguished people, and of course, there any many others in the region who equally deserve recognition. I am very fortunate to work with groups of remarkable people – our students and alumni, people at our social responsibility and corporate partners, and my own regional team – who are all making an impact and a real difference. I congratulate all of those whose efforts are rewarded and encourage all those who go unrewarded to sustain their commitment because people can make a difference.”

The University of Manchester has a global mission focusing on the three pillars of teaching, research and social responsibility. The Middle East Centre supports all three pillars and in addition to the extensive teaching programme, it has also been active in regional and local research, and in social responsibility through its support for a range of local community initiatives. The University of Manchester was named as the world’s 27th best university in the QS World University Rankings 2022, sixth in the UK, and eighth in Europe.