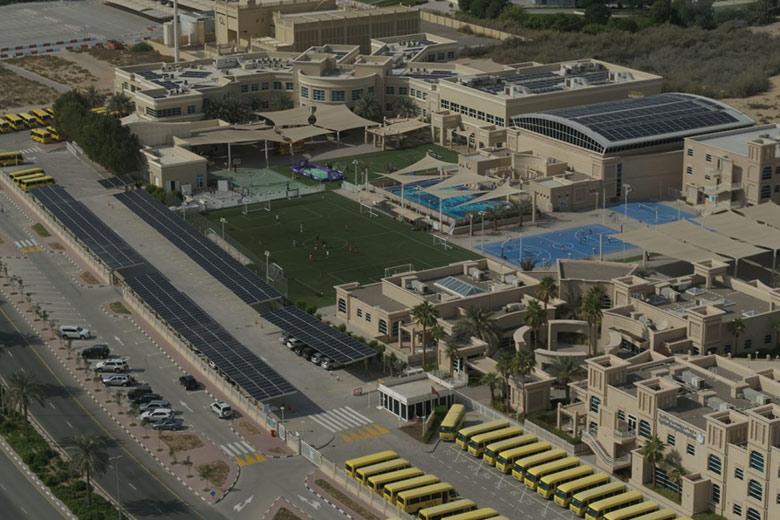 The Lycée Français International Georges Pompidou (LFIGP), a widely recognised French school in Dubai, and TotalEnergies, a regional leader in the Middle East and Africa in the development of solar solutions for commercial and industrial businesses, have celebrated the commissioning of two solar photovoltaic rooftops and a carport at the school’s Academic City site in Dubai.

Pascal Charlery, Principal of LFIGP school, said: “We are pleased to be among the first schools in Dubai that have taken up the challenge of energy transition. This project helps us to strengthen an effective sustainable development culture within the LFIGP’s community through various educational projects and excursions.”

“The LFIGP took a great initiative by going solar and we are proud to have played a crucial role in their solar energy transition. Thanks to this solar project, the LFIGP will considerably reduce its carbon emissions and we hope it will raise students’ awareness about renewable energy,” said Hamady Sy, Managing Director, TotalEnergies Renewables Distributed Generation Middle East and Africa. “We are sharing the same vision for a sustainable future, which is why this partnership is so successful.”

The LFIGP has been operating for more than 40 years and is recognised as the pre-eminent French-speaking school in Dubai. Whilst the majority of teachers and students are French, the school counts up to 50 nationalities among the student body. Providing instruction at all levels per the objectives, programmes and methods set by the French Ministry of Education and following the instructions of the local educational authorities, the LFIGP has set itself the objective of excellence in a multicultural environment conducive to the development and success of each.

In April 2019, the LFIGP received the ecological certification E3D (Etablissement end émarche de développement durable) label, which aims to recognise the school as an institution in the process of sustainable development and implements projects to ensure continuity between teaching, school life, management and maintenance of the school structure. In line with its commitments, the LFIGP chose TotalEnergies as its trusted partner to power its site in Academic City with renewable electricity.

More than 1300 solar PV modules are installed over the primary school’s rooftop, the gymnasium’s rooftop, and the carport

In September 2021, TotalEnergies commissioned a solar photovoltaic (PV) project for a total of 638kilowatts-peak (kWp) for the LFIGP. More than 1300 solar PV modules are installed over the primary school’s rooftop, the gymnasium’s rooftop, and the carport. The solar project will produce over 1,000 megawatt-hours (MWh) in its first year of operation, covering 40% of the school’s energy needs.

In total, the LFIGP will reduce its carbon emissions by over 430 tons of CO2 annually, equivalent to approximately 11,000 trees planted yearly.

“It is a green, profitable and educational project, which will have a significant long-term impact on the LFIGP, and which will allow us to significantly reduce our dependence on carbon energies, to promote a reduction in our energy costs and to position the LFIGP as a modern school, capable of meeting the energy challenges we are all facing today,” said Alexis Renouf, Head of Operations for the LFIGP.