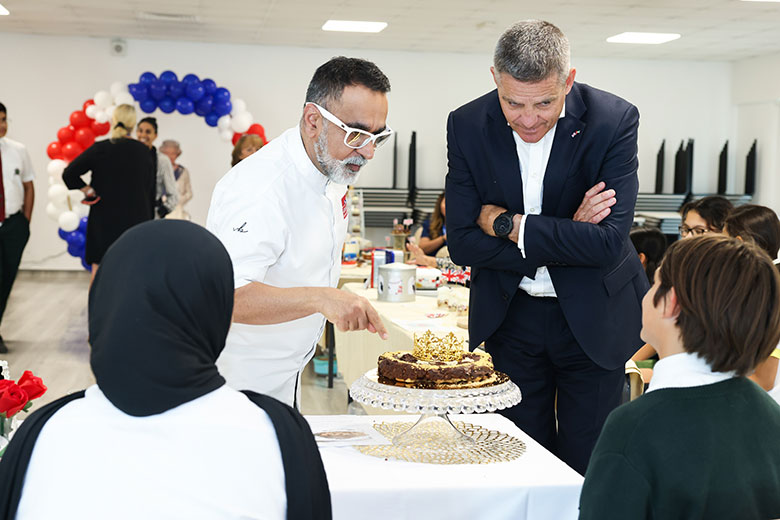 This year’s hotly anticipated and contested Jumeirah College (JC) Bake Off played host to special guest judges Vineet Bhatia, restauranteur, media personality, author, and renowned chef with two Michelin Stars to his name, as well as Simon Penney, His Majesty’s Trade Commissioner for the Middle East and His Majesty’s Consul General to Dubai and the Northern Emirates.

The student-led event, organised by Year 12 student Yoana Sawlani, took place on campus at GEMS Jumeirah College Dubai and saw students and teachers showcase their abundant baking skills in the form of exquisite cakes and sweet treats – all aligned to the theme of paying tribute to Her Late Majesty Queen Elizabeth II.

Chef Vineet Bhatia said: “It brings me immense pleasure to work with children, engage with their impressionable minds, and at the same time acquaint them with their own abilities, harnessing their imagination and creativity. With baking, you start off with basic stuff like flour, butter and eggs, and what you end up with is so totally different and delicious! I find it inspirational and therapeutic at the same time. Although this time I am equally excited to see if Her Majesty Queen Elizabeth’s favourite chocolate biscuit cake and scones make an appearance.”

The judges were faced with the exceedingly difficult task of picking out their favourite creations from among the 75 on display. After much deliberation – and plenty of tastings – the judges agreed on their overall winner.

Year 7 student Isabella Maclean was crowned the JC Bake Off champion. Describing her win and her Union Flag and crown-inspired cake, Isabella said: “It’s two tiers: vanilla with buttercream and pearls around it, with fondant and icing sugar with a little lemon to hold it in place. It represents the Queen and her love for the UK and just how great a Queen she was. Winning the Bake Off means so much to me. I’m so happy!”

In joint second place were Sophie Ingham of Year 9 and Laetitia Tourneur of Year 8, followed by baking duo Simone Ramchandani and Saha Sharif, both in Year 11, and Year 10 student Yehui Feng in joint third, while Derin Rall in Year 7 picked up a special commitment and dedication award.

1 day ago by educationuaemag Each year on Commemoration Day, Education UAE pays respect and homage to the Emirati soldiers who sacrificed and dedicated their…

3 days ago by educationuaemag  @skidxb  to Host First-ever Festive Fun Run It’s officially the most wonderful time of the year as Ski Dubai, in…