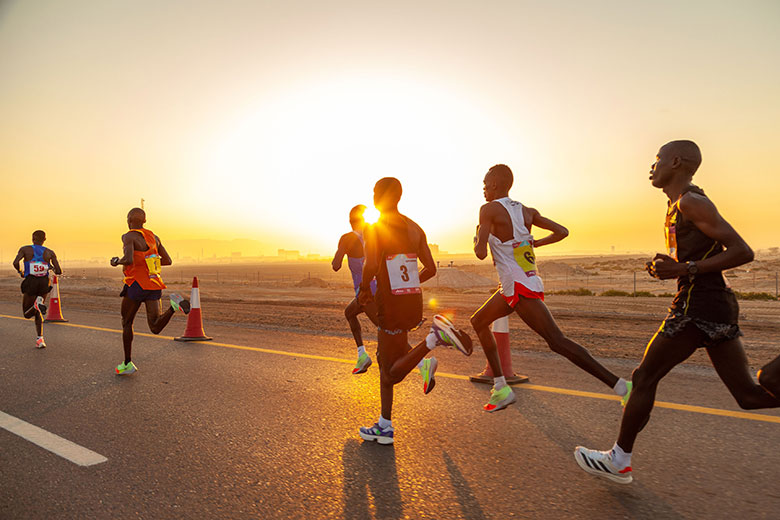 by Stephanie Humphrey, Ras Al Khaimah Half Marathon Endurance Running Coach and member of the #RAKHalf2023 Under Armour Squad

Running during summer, especially in the Middle East, is often a task. Paces drop, heart rates rocket, sweat rate is almost unfathomable, and for many, the desire to train decreases. However, with a few relatively simple amends, this time of year can be a fundamental period in your training calendar.

As opposed to throwing in the towel and avoiding the outside world, change your approach and use the summer to your advantage. If you train smart, this can be a vital time for positive physiological adaptations that will aid your winter race season, with key benefits including, an increase in the production of haemoglobin, a boost in plasma volume, an increase in VO2 max, and enhancement in cooling capabilities.

However, to benefit from these, it is important to set down your winter running paces and prepare accordingly. With expert tips from Stephanie Humphrey, get ready to embrace the weather, find the motivation to run more consistently than ever, and look forward to new ‘personal bests’ in the winter.

No records are going to be set on Strava during summer, and if they are, you could question what your training looked like in the winter months. Let go of any pace goals on runs, and instead, train to heart rate or RPE (rate of perceived exertion). Your body is under more stress in the heat, and working harder to cool itself down, meaning it is physically impossible to hold the same pace for the same effort as in the cooler months.

Find the motivation to run more consistently than ever, and look forward to new ‘personal bests’ in the winter

While the temperature at night-time remains high through the summer months, it is also significantly cooler than in the daytime. Take advantage of this by shifting your training runs to sunrise or sunset. This does not imply you should run in the middle of the night but starting your day a little early at 5.00 am or 6.00 am to beat the sun is often a good idea. This also means being flexible with your bedtime, if you’re hitting the runs early on, ensure that you are getting to bed on time to aid recovery. On average, the ideal is to aim for at least seven to nine hours of sleep per night.

As a rule of thumb, always go into your runs well-fueled and hydrated. The fueling part is especially crucial for female runners who are training first thing in the day as cortisol levels are elevated in the morning. This means your body is already naturally under some stress and running in the heat on an empty stomach will only elevate this further. Therefore, get your breakfast in before you head out the door to decrease that cortisol level.

Hydrating with electrolytes pre, during, and post runs will allow you to replenish your sodium

On the other hand, hydrating with electrolytes pre, during, and post runs will allow you to replenish your sodium, which is typically lost through sweating. Naturally, you will be sweating more in summer, hence losing more sodium and faster. Moderate sodium levels are important as it regulates levels of fluids in the body. If this becomes out of balance, you can severely suffer from fatigue.

About the Running Hub

A new addition for the Ras Al Khaimah Half Marathon 2023, the Running Hub is designed for all types of athletes, featuring articles covering a wide range of topics, including running in the heat, prepping for race day, motivation tips, discipline, and much more. As the official technical sponsor for the upcoming race, Under Armour is embedded in all core activities in the lead-up to race day including exciting videos from the race ambassadors, the #RAKHalf2023 Under Armour Squad, a part of the Running Hub.

Running enthusiasts and half marathon participants can now keep up their training with a series of new articles set to be published on the newly introduced Ras Al Khaimah Half Marathon 2023 Running Hub. For those looking to get a feel of the course this summer, train in the nature-based emirate, which is widely known for being less populated, offering cleaner air, and is also home to Jebel Jais, the perfect destination for altitude training in the UAE.