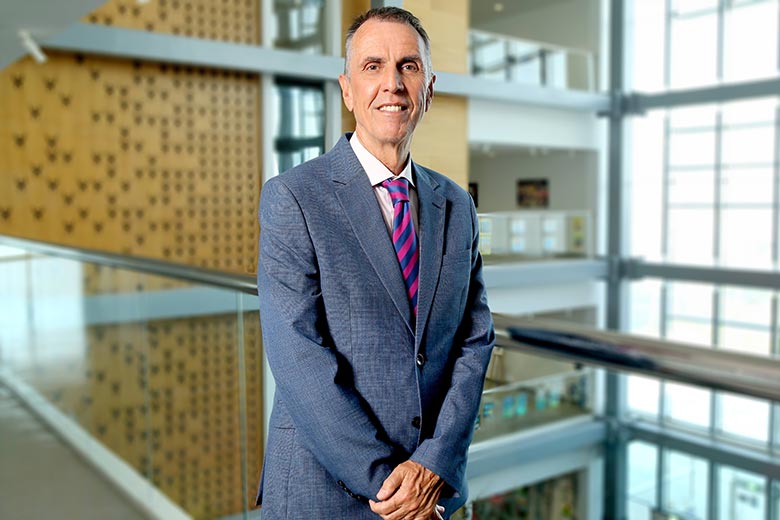 A creative, family-first IB curriculum school for students aged 3 to 18 years old, Bloom World Academy will open the doors for Pre-KG to Grade 9 students at its state-of-the-art campus in Al Barsha Dubai in August 2022. Offering a dynamic, creative and constantly evolving education, this is a school that dares to be different. Ideas don’t stand still and neither does Bloom World Academy.

We caught up with John Bell, the Founding Principal, and asked him about what makes the school stand out in a fiercely competitive sector, beginning with the school’s customised approach and how this education pathway will benefit students at Bloom World Academy?

“What we’re doing is taking different approaches to education and combining them to provide a holistic and unique style, and much of it is based on my own experience. I’ve been a Head since 1996 and have had the privilege to have seen and worked with a lot of schools and school groups; that’s where many of the ideas come from,” John begins. “We will, for instance, have a school start time of 9.00 am, which may not be revolutionary, particularly if you come from other parts of the world where this is the norm. What is revolutionary is that, although the official school day is 9.00 am to 4.00 pm, the school will be open from 7.00 am to 7.00 pm.

“What this means is that if parents work in another part of town, for example, and they want to drop their children off early, they can do so. Similarly, if they are working late, there will be a variety of clubs – themed around well-being (arts and sports), for children to attend. At the bookends of the day, there will always be something for youngsters to do, including a homework club so that they don’t have to do it all at home. It’s all designed to take the pressure off the family and is an idea I have taken from my time working in Spain where it is common for parents to drop their children off in the morning at a time to suit them. It seems to me that that is a civilised approach. Of course, we would be worried if a child was regularly dropped off at 7.00 am and picked up at 7.00 pm, but it does allow parents to customise the school day to suit their individual needs and requirements.”

A Passport to Success

Bloom World Academy is also launching a Learning Achievement Passport, which every child will have. It is designed to enhance both life and curriculum learning in a fun, engaging and quantifiable way. “This will be a summary of a student’s educational journey; their strengths and challenges will be recorded. We will stretch targets, hopefully stretching children to achieve a target above age-related expectations, which will be reviewed monthly with the student and parents,” John explains. “Often, assessments are a part of parents’ evenings, but we will broaden this out so that every teacher will see one or two parents every day for around 30 minutes on a rolling basis.”

The school realises that parents are paying not inconsiderable sums of money for their child’s education and they want to become involved. “There are many nooks and crannies and seating spots around the school; lovely environments where parents and teachers will meet. Learning Achievement Passport will build up to nine sessions a year and a summative document will be given to parents every term in the form of a dashboard of achievements, as well as an annual review.

This information will be utilised to the full, with Bloom World Academy having invested heavily in an analytics database, with an Information Services Manger whose job it is to digest all of the information and feed it back to teachers in a way they can use most effectively with each individual student and family.

There is another aspect of customisation that the school has developed too, ‘stage not age’. How reassuring it is to begin to see a genuine dialogue beginning to push for us to understand that children learn differently, in their own way. “We’re talking about attributes as well as ability,” John says. “If your languages are at a certain level and you’re keen enough to push on, there are opportunities. A five-year-old and an eight-year-old might be in the same room doing the same work if their languages are at the same level. Another subject that lends itself to stage not age very easily is music. If you’re learning to play an instrument you’ll be given the opportunity to do that regularly.

The other aspect of the customised offer is Learning Zones. Students will move around the school to specific Learning Zones to become fully immersed in a learning experience.

John explains: “You go to the Science Learning Zone to learn science, even the younger children, in fact all of junior school will do this. In the Language Zone, for instance, all of the languages will be there, such as Spanish, French and Arabic.”

“Those are the four big constructs, and the fifth and final customised element is not really customised at all, it’s a spiral curriculum of social and emotional skills development, with a major aspect being empathy, being kind and understanding of other people’s feelings. So in a way, that’s not customised to the child, it’s customised to the school.”

Bloom World Academy is also committed to having a valid and open students’ voice, which will be based on the Roman Forum, where people used to meet to listen and debate. “We’re going to have our own forum with raised seating on four sides,” John explains. “Every morning, children can sit wherever they like with whomever they like, and that’s where we will set the tone for the day.”

A new school with an exciting new philosophy, but did John need to think twice when offered this opportunity? “Not really. I’ve been a director of schools and school groups for the past 10 plus years. I was Director of Education in England, Director of Education for Cognita, the worldwide schools’ group, and I was the Director of Learning for a school’s group in Dubai. So perhaps coming back into the classroom was my biggest fear – could I work effectively with parents – that closeness and intimacy again? But it’s the aspect I’ve enjoyed the most so far! Consequently, I didn’t have to think twice.

Finally, we asked John what his ultimate vision is for the school, and he didn’t have to think twice again, replying: “I want Bloom World Academy to be known for its quality rather than its quantity. I want it to be a school of its time for a generation of young people that are more socially sensitive and environmentally aware than in the past. They are creative, innovative and entrepreneurial and we really we want to provide the very best opportunities and education for them”.