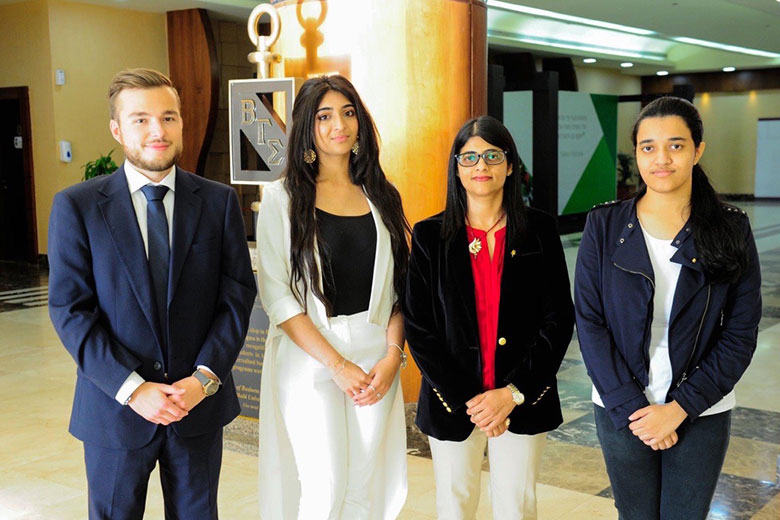 Abu Dhabi University’s (ADU) College of Business (CoB) has been recognised by the prestigious Beta Gamma Sigma Awards (BGS), the international honour society of the Association of Advanced Collegiate Schools of Business (AACSB). ADU’s BGS chapter was selected from a pool of over 615 chapters representing 38 countries internationally and received the ‘Gold Outstanding Chapter’award.

Each year, the BGS Outstanding Chapter Awards are presented in the categories of gold, silver, bronze   and best practice levels. These awards are merit recognitions presented to chapters that have a variety of activities, programmes and events available to students that support the BGS mission.

CoB at ADU received the Gold Outstanding Chapter award in recognition of the holistic educational experience provided to students and faculty. As part of the award, one of ADU’s outstanding students will receive a scholarship from the BGS Society. The ADU BGS chapter earned the award due to its notable commitment to the BGS mission and remarkable participation in several chapter activities. As part of its commitment to the BGS honour society, the BGS-ADU chapter has implemented various student-centric activities such as the distinguished speaker series, mentorship programme, BGS gives back and an executive shadowing programme.

Professor Barry O’Mahony, Dean of the College of Business (CoB), said: “I would like to extend my gratitude to the Beta Gamma Sigma International Honor Society for recognising our commitment to the mission of Abu Dhabi University’s (ADU) BGS Chapter. At the College of Business (CoB), we provide our students with a well-rounded academic experience and present faculty with the opportunity to elevate their skillset. In addition, we encourage them to tackle new experiences and gain a wider knowledge of their field. We are continuously searching for ways that will improve our students’ experience to prepare them for the career market.”

Professor Fauzia Jabeen, BGS Chapter Advisor and Professor of Management at Abu Dhabi University’s (ADU) College of Business (CoB), commented: “We are delighted to receive the ‘Gold Outstanding Chapter’ award from the prestigious Beta Gamma Sigma Awards (BGS). This recognition reflects Abu Dhabi University’s (ADU) ongoing commitment to provide our students with a world-class learning experience and an exceptional academic journey with leadership and business acumen that will best prepare them for their future careers. At ADU-BGS Chapter we are thankful for being recognised and we intend to live up to the level of success this award demands.”

Established in 1913, BGS is an international honour society which operates exclusively for AACSB-accredited business programmes. Membership in BGS is highly selective, reserved for top students within the top 5% of business schools around the world. Members of BGS go on to lead – and even create – some of the largest and most successful companies around the globe. Headquartered in St. Louis, Missouri, USA, BGS has inducted more than 830,000 members worldwide since its inception. Its mission is to encourage and honour academic achievement in business, thereby cultivating professional excellence to advance the values of the Society and serve its lifelong members.