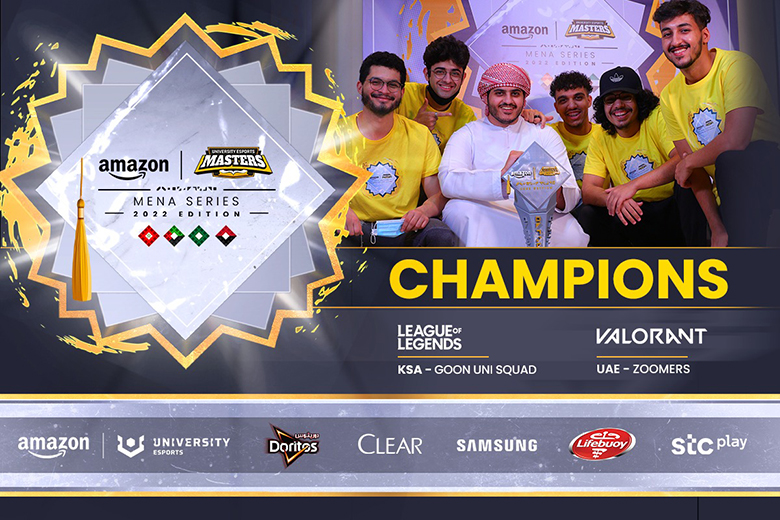 Considered as one of the top esports tournaments within the university ecosystem in Europe, the first edition of the Amazon University Esports Masters MENA has shown a great level of rivalry among the different teams. The teams were not only competing for a share of a $10,000 prize pool but also representing their countries and universities in this international tournament, and wanted the prestige of being crowned as the first MENA university champions in League of Legends and Valorant.

In Valorant, after their great performance in the tournament, Hamdan ‘Shuriken, from ‘Zoomers’, stated that: “I feel honoured to be a part of the victorious team in Amazon University Esports Master MENA champion. Competing internationally felt great, especially because I have shared the experience with my real-life friends. The setup and the organisation were perfect, plus we played against really cool competitors. We had fun, it was like playing against your friends, so everything went smoothly.”

Being a participant among 40 other university students from 31 universities across the UAE, KSA, Egypt and Morocco, has been a once-in-a-lifetime experience for the competitors.

Mario Pérez, CEO of MENA Tech, said: “This first regional final is just the beginning of our commitment to helping increase the esports space in the region and be an essential path for those students passionate about video games to develop their professional careers and personal skills. Our success is thanks to our partners, Riot Games and Amazon, who are helping us become a strong reference in the region.”

A Sector in Continuous Growth

Since its inception, Amazon University Esportshas witnessed the enormous expansion of the esports sector, not only as a competitive discipline but also as a booming job market. In 2022, the global esports audience is forecast to reach 532 million and those in emerging regions, which includes MENA, are predicted to continue to rise, going from 83.6 million in 2021 to 95.5 million in 2022. Amazon University Esports is currently present in more than 20 countries on four continents, with the participation of nearly 2,000 universities and more than 25,000 students. In the last two years, it has become one of the top esports leagues worldwide at the university level and has the support of important brands present in this environment.

Particularly in the MENA region, this last season of the Amazon University Esports competition had representatives from approximately 170 universities, 1,700 teams and more than 8,600 players from these four countries who have been competing since November 2021 to reach these finals. Competitions of this level serve as an entry vehicle for young skilled professionals, gamers, creatives and, in general, innovators in this thriving industry.

The organisation of the first edition of this championship in the MENA region has been made possible by the support of companies such as one of the most important publishers, Riot Games, which has collaborated with GGTech in university competitions worldwide from the very beginning, and sponsors who accompanied us through this first-year competition in each market as Samsung, Clear, DoritosandSTCin KSA, as well as SamsungandLifebuoyin the UAE.