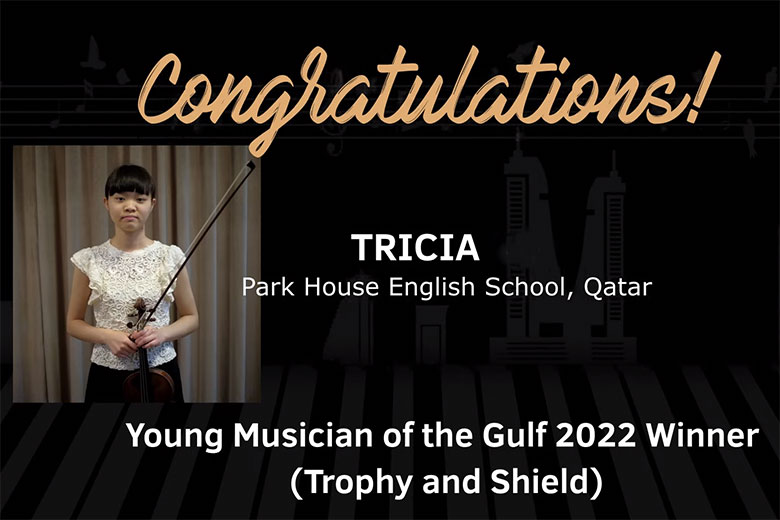 As an annual event celebrating young musical talent in the region, The Young Musicians of the Gulf is open to all talented musicians from British schools in the Gulf region. This is the second year, due to Covid-19, that the competition was done through virtual performances, showcasing only solo musicians.

“Commanding”, “Impressive” and “Outstanding” were just some of the words Tricia received as feedback from the official adjudicators of the competition, as she beat 103 other participants to win this year. She won the Best Bowed String Award in the 2021 competition, and this year, out of the eight musicians who qualified for the finals, she was the only violinist and the overall winner.

Tricia recognised the support she received from her sister to secure the win. “None of this would have been possible without my sister, Nicole, who carved out time from her busy schedule to learn the pieces and accompany me on the piano in my recordings,” she said.

“We are happy that Tricia won but winning (or not) is just temporary; what is more important is what you learnt from the experience and path taken; that remains with you all your life. We hope her pride and focus are on the latter and not the prize and trophy,” shared Dr Thye-peng Ng, Tricia’s father.

John Smith, Principal of Park House English, said: “Tricia is a model student at Park House and her talent knows no bounds. I am delighted that she has won one of the premier music competitions in the region and it is richly deserved. I have no doubts that Tricia will go on to be highly successful in everything she does in the future, and we are all very proud of her achievements in this competition and elsewhere.”

Park House English School, part of the International Schools Partnership (ISP), a global group of schools, is one of the oldest and most recognized British Schools in Doha. The school caters to students from Nursery to Year 13. Park House is a member of CIS and BSO organisations. The school is also a member of the British Schools of the Middle East grouping and regularly competes in a range of inter-school and GCC tournaments.