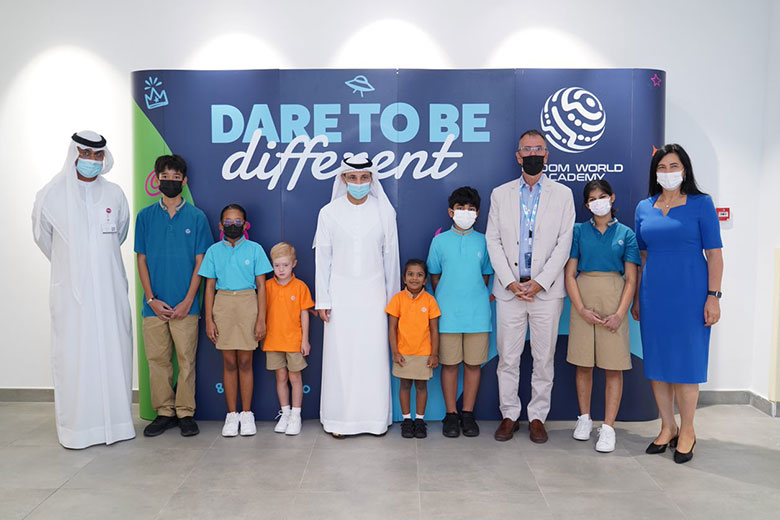 Bloom World Academy has welcomed His Excellency Dr Abdulla Al Karam, Director General, Knowledge and Human Development Authority (KHDA), to the inspiring new world of education with a guided tour of the school that dares to do things differently in education. Bloom World Academy has introduced a number of firsts to the United Arab Emirates, such as the later school start time of 9.00 am, and a flexible school day which allows for student learning to be in balance with family life.

Dr Abdulla was greeted by Founding Principal, John Bell, along with the school’s teachers and over 300 students from 53 nationalities who joyfully greeted him and sang the UAE national anthem. The students then performed the Bloom World Academy official school song, which the children wrote together with the Head of Music.

Founding Principal of Bloom World Academy, John Bell said:“We are incredibly proud to welcome Dr Abdulla Al Karam, Director General of the KHDA to our new school. Since opening only a few weeks ago, we are now home to an amazing cohort of over 300 students, who have embraced our way of doing things differently. From our later start time to choosing their own learning pathways, Bloom World Academy is delivering what we promised.”

Dr Abdulla was greeted by Founding Principal, John Bell, along with the school’s teachers and over 300 students from 53 nationalities

Bloom World Academy is now accepting admissions for this academic year, with limited places available in certain year groups, as well as 2023/24.

For more information and to book a school tour today, visit bloomworldacademy.ae or contact 04 371 4774.