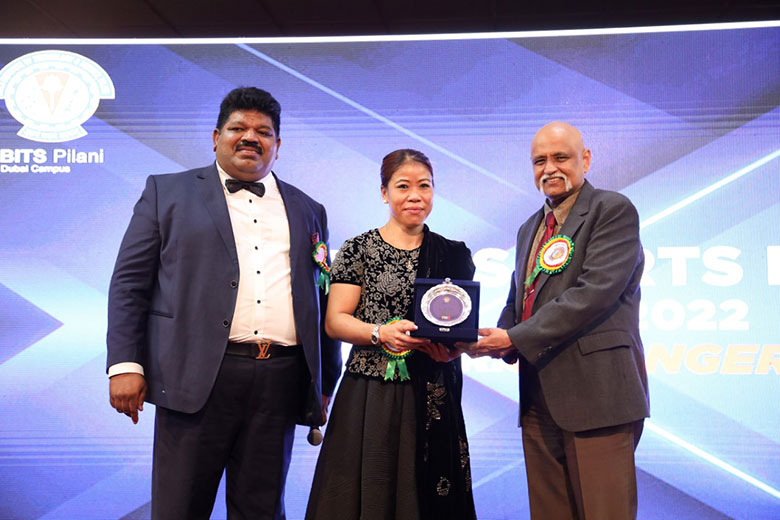 The 19th edition of BSF set a record as 34 universities and 5000 students across the UAE participated in the event, thereby cementing its position as the top sports festival in the country. This edition of BSF also featured ‘BSF for Schools’ which saw 18 schools with over 1000 students competing in a variety of events.

The closing ceremony was graced by World Women’s Boxing Champion Mrs Mary Kom, as the Chief Guest, Professor Srinivasan Madapusi, Director of BPDC, Dr M. Rafiuddin, Convener, BSF, students and staff from various colleges, and sponsors. Celebrating the Spirit of the Union and symbolising animal conservation efforts, the Arabian Oryx was declared as the official Mascot of BPDC in the presence of Mr Callum Howard Chase and Mr Saeed Mohamed Alhashmi, the Education Officers from Dubai Safari Park.  The mascot is named MAHA, which means ‘radiant’, ‘beautiful eyes’ in Arabic, and ‘great’ in Sanskrit.

High-intensity games, nail-biting finishes, and the spirit of sportsmanship were witnessed as the teams vied for top spots in multiple sports categories such as football, cricket, throwball, basketball, volleyball, tennis, and athletics along with indoor games like chess, badminton, and table tennis. This year also saw the introduction of a new category, ‘Women’s Boxing’, wherein Ms Samreen from Ras Al Khaimah Medical Health & Science University and Ms Hana from BITS Pilani Dubai Campus played a match in presence of Mrs Mary Kom, making it a memorable event. The adrenaline rush was strongly felt among spectators too, as the teams battled it out to crown the best of the best in each category.

Addressing the students of BITS Pilani Dubai Campus at the closing ceremony, Padma Vibhushan Mrs Mary Kom, said: “Playing sports and staying fit are not just beneficial for the body but also for our mind. It will help us live a longer, stronger life and study better by improving concentration. This is the secret of my success in whatever I have achieved so far.” Her wise words resonated well with the audience given the recently concluded Dubai Fitness Challenge.

The BPDC team received massive support on the home ground as they played every match like champions and deservedly won the Overall Championship Trophy with five gold medals and three silver medals. Middlesex University was the runner-up with four gold medals and one silver medal.

Professor Srinivasan Madapusi, Director BPDC, congratulating the participants and the winners, said: “Invariably, sports and physical activities are usually not deemed important for a healthy and successful life. BITS Pilani Dubai Campus makes itself an exception by hosting the biggest sports festival in the UAE with every edition witnessing growth in participation. BITS Sports Festival has always been more than a conventional sports festival and I congratulate each and every one associated with it for making it a resounding success year after year. We are grateful to Mrs Mary Kom who attended the event as Chief Guest and shared valuable lessons from her life with the students. They are our true role models and sources of inspiration.”

Mr Issam Barakat, Sports Coordinator, The Higher Colleges of Technology, said: “I take this opportunity to thank and express our pleasure to BPDC for organising such a successful sports festival. Our students have thoroughly enjoyed themselves and have wonderful memories”.

The excitement was not just confined to the sports field; there were live events, mouth-watering food, background music, fun interviews, and jolly games that kept the audience enthralled. A surge of emotions was felt as the event ended with Dr M. Rafiuddin, Convener, BSF thanking all those involved organising and conducting such a memorable event.

BSF2022, was indeed a memorable event with extraordinary matches, good camaraderie amongst the students, and stunning performances that truly exhibited the spirit of sportsmanship.