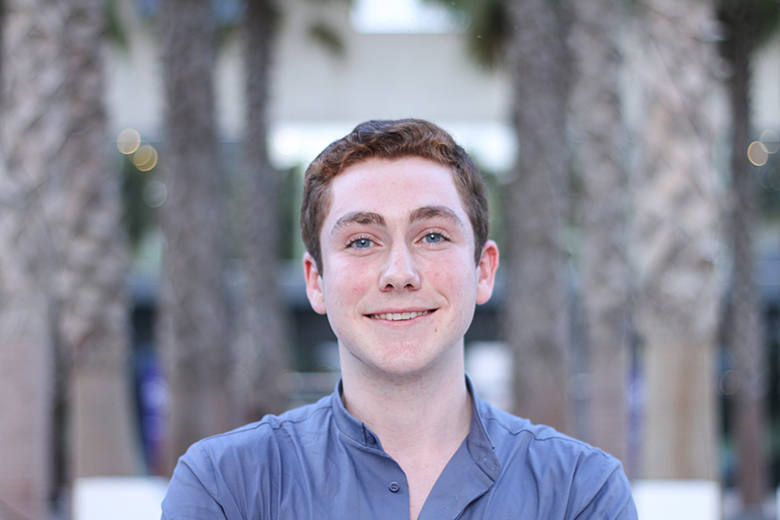 NYU Abu Dhabi (NYUAD) students Lin Ye and Sophia Yushchenko (Class of 2022) and Herbert Crowther (Class of 2021) have been named 2023 Schwarzman Scholars, one of the world’s most prestigious graduate fellowships located at Schwarzman College on the campus of Tsinghua University in Beijing. Including these three scholars, NYUAD has had a total of 15 scholars from nine different countries.

Schwarzman Scholars was inspired by the Rhodes Scholarship and is designed to prepare future global leaders to meet the geopolitical challenges of the 21st century. Scholars pursue a Master’s degree and leadership program at Tsinghua University in Beijing, China. Once admitted, Scholars pursue a one-year Master’s degree in Global Affairs with a core curriculum focused on three pillars: leadership, China, and global affairs.

Ye, 23, from China, is double majoring in Philosophy and Psychology with a minor in Applied Mathematics at NYUAD. She co-founded and developed NYUAD’s first student-led forum in the region, China-Gulf Forum, which addressed opportunities and challenges in China-Gulf relations. She also directed the first Annual Undergraduate Philosophy Conference at NYU. She was also president of the Chinese culture club at NYUAD and interned at PriceWaterhouseCoopers and worked for PriceWaterhouseCoopers (PwC), Bain & Company, and Byte Dance.

NYUAD has a total of 15 scholars from nine different countries

“I am grateful to my education which gave me the motivation, mindset, and courage to genuinely experience the world as it is, and more importantly, to love and respect it. NYUAD offered me generous support and resources which allowed me to explore and take on various challenges that shaped who I am today. I am truly thankful to all my mentors and peers who have supported me along the way,” said Ye. “Privileged with a global education, I look forward to deepening my understanding of the real world via the Schwarzman Scholars program and eventually devoting myself to furthering regional development and empowering others.”

Crowther, 22, from the US, majored in Political Science with a double minor in Chinese and Economics at NYUAD. Throughout his NYUAD career, Crowther was President and Vice-President of the NYUAD Debate Union, as well as President of the NYUAD Catholic Community SIG. He has completed several internships in the field of energy and climate, including with the US State Department’s Office of Energy Transformation, the Atlantic Council’s Global Energy Center, and Rapidan Energy Group. Herbert currently analyses energy transition and climate issues with the Eurasia Group’s Energy, Climate, and Resources (ECR) practice.

Crowther said, “I am deeply grateful to have received a Schwarzman Scholarship this year – I am most primarily thankful to all the great instructors and peers I have had here at NYU Abu Dhabi and before, as well as the many non-academic mentors who have helped me tremendously and made this opportunity possible. Being immersed in China, particularly at a historically-rich university like Tsinghua, will be a chance to understand many of the world’s most pressing future issues from a completely new angle – even an angle that is distinct from here in Abu Dhabi. For my interests in energy and climate, there is likely no country more important to understand than China, and I can’t wait to get to work next fall.”

Yushchenko, 22, from Ukraine, is majoring in Legal Studies with a double minors in Political Science and Urbanization at NYUAD. While at NYU, she served as Director of the Student Embassy Ambassador Liaison Program and as President of the Ukrainian Student Interest Group. Her Capstone project explores the Chinese International Commercial Court and its impact on the Belt and Road Initiative. Recently, she was a Moonshot Apprentice at the Mohammed Bin Rashid Centre for Government Innovation in Dubai, where she worked with government ministries to find cutting-edge solutions to pressing problems for future governments.

Yushchenko said, “I strongly believe that China will play an increasingly important role in global business, economy and politics, and I wish to gain an in-depth perspective on the country, its history, culture, and people. I am enthusiastically looking forward to interacting with the other Schwarzman Scholars, who represent so many different regions and interests. I hope to be able to use the knowledge and relationships I gain to build economic, educational and cultural bridges between China and my own country, Ukraine.”

Schwarzman Scholars are taught by leading international and Tsinghua faculty, with frequent guest lectures from prominent global thought leaders. Beyond the classroom, Scholars gain exceptional exposure to China and access to important relationships through internships, mentors, high-profile speakers, and world-renowned faculty members. Scholars are also provided with a range of career development resources to help position them to lead in various industries upon graduation.