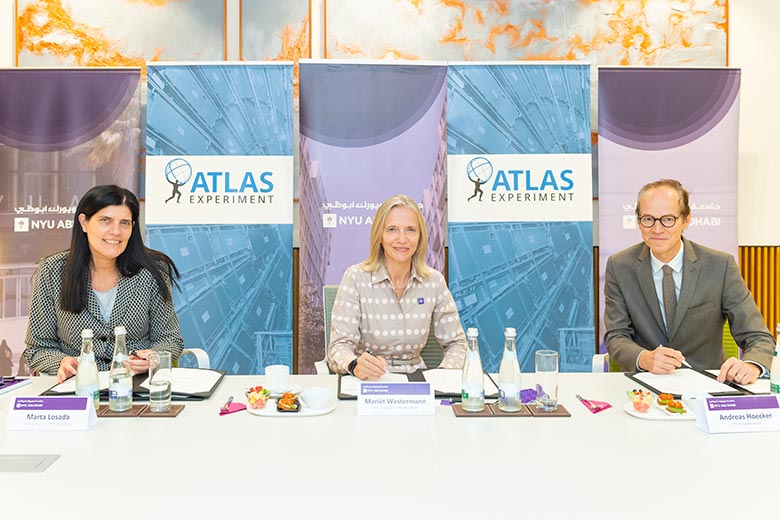 NYU Abu Dhabi (NYUAD) will represent the United Arab Emirates (UAE) along with two other universities, the University of Sharjah and the United Arab Emirates University, as a Cluster Institution in the ATLAS experiment, one of the largest collaborative efforts ever realised in science. ATLAS is a particle physics experiment at the Large Hadron Collider (LHC) at CERN, the European Organization for Nuclear and Particle Physics Research (CERN), one of the world’s largest and most respected centres for scientific research.

The MoU signing between CERN, Geneva, the UAE ATLAS Cluster and the University took place during an event hosted by NYUAD’s Science Division. Andreas Hoecker, elected ATLAS spokesperson 2021-2023 delivered a keynote speech and co-signed the MoU with NYUAD Vice Chancellor Mariët Westermann and Dean of Science and Professor of Physics at NYUAD, and ATLAS Team Leader Marta Losada, to mark the beginning of the collaboration.

Marta Losada was already part of the wide-scale international ATLAS collaboration that discovered the Higgs boson in 2012, an elementary component in the physics framework that defines everything in the known universe. The observation of the particle was the last hidden component on the journey of solidifying the fundamental model of physics.

Losada commented: “This is such a rewarding and inspiring moment at the same time. ATLAS’ exploration pushes the frontiers of knowledge by seeking answers to fundamental questions and it is such a privilege for us to be part of this quest for the unknown. NYUAD has huge potential, I only had to come here once to recognize it and this collaboration is an unparalleled opportunity for the advancement of science at NYUAD and the development of research capacity in the UAE.”

ATLAS is a collaboration of physicists, engineers, technicians, students, and support staff from around the world that continues discovering some of the most important innovative developments in technology and physics in the search for the unknown; exploring and discovering new phenomena beyond existing theoretical predictions. ATLAS physicists are studying the fundamental constituents of matter to better understand the rules behind their interactions.  Their research has led to ground-breaking discoveries, such as that of the Higgs boson.