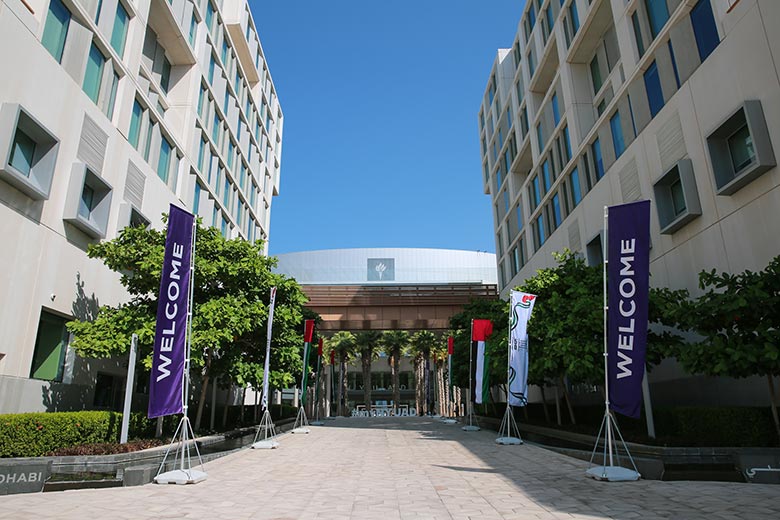 NYU Abu Dhabi (NYUAD) will mark the UAE’s Golden Jubilee with a series of virtual and in-person events to celebrate the country’s history, cultural heritage, values, and achievements as the nation prepares for the next 50 years of transformation and advancement.

The celebration includes student-led events and activities, such as ‘Emirati Mandoos’, during which students will show a selection of Abayas throughout the week. Kicking off today, a historic conference organized in partnership with the Oxford Commission on Constitutions will bring together local and international senior government officials, academics, and law experts, who will delve into the history and the future of the UAE’s constitution.

The Arts Centre at NYUAD will continue the celebrations on 24 November with a line-up of poets, spoken word artists, musicians, and storytellers for the seventh annual Hekayah | The Story, a special 50th Anniversary Jubilee virtual edition that will showcase the UAE’s cultural diversity.

Hekayah will begin with a conversation between NYUAD Vice Chancellor Mariët Westermann and HE Zaki Nusseibeh, who will give a presentation on the history of the UAE and his work at the side of Sheikh Zayed bin Sultan Al Nahyan, the founding President of the UAE.

Furthermore, The NYUAD Institute has released two online talks on their YouTube channel that focus on remarkable moments since the Emirates’ historic unification. Titled Five Days That Shaped the UAE, the first talk reflects on the period of celebration, turmoil, and anticipation over five days between 28 November and 2 December 1971.

The second talk, A Map of Many Cities: The Making of “Building Sharjah” explores the collaborative research efforts to produce Building Sharjah, the first book not only in the UAE but the region to document the history of the Gulf city.

In line with NYUAD’s commitment to promoting the UAE’s rich and complex art scene, and to mark the 50th anniversary of the country’s founding, The Art Gallery at NYUAD in partnership with The Middle East Institute (MEI) Arts and Culture Centre will present Between Sky and Earth: Contemporary Art from the UAE. The exhibition, curated by Munira Al-Sayegh, will be hosted at the Middle East Institute in Washington, D.C., from 3 December to 31 March 2022.

NYUAD Vice Chancellor Mariët Westermann said: “We look forward to honouring the UAE’s historic Golden Jubilee with a program of events that speak to the country’s remarkable rise and achievements in just half a century. We will celebrate its cultural diversity, its ingenuity and optimism, and its commitment to education and tolerance. These values resonate deeply with NYUAD as we reflect on our own recent 10th anniversary celebrations. Our mission to create a world-class centre of academic excellence at this global crossroads would not have been possible without the vision, energy, and dedication of this nation’s leadership and the support of its citizens and residents. We look to the next 50 years of the UAE and our own university with a renewed sense of purpose.”

NYUAD’s research centre, al Mawrid Arab Centre for the Study of Art, will launch its inaugural exhibition from December 2021 – May 2022. Curated by Assistant Professor of Social Research and Public Policy at NYUAD and Principal Investigator at Haraka: Experimental Lab for Arab Art and Social Thought May Al Dabbagh, the show is titled Sharbaka: Entanglement / Attunement. The exhibition features five artists whose works serve as archives of the UAE, exploring themes of gender, globalization, capitalism, mobility, and migration. The exhibition is commissioned and will be shown at New York University’s 19 Washington Square North in New York.

Akkasah, the photography archive at al Mawrid, and home to an archive of the photographic heritage of the Middle East and North Africa, will launch a new UAE-focused collection for National Day with a gallery of 11 newly digitized photographs. The collection of over 700 photographic prints belongs to the family of a senior advisor to His Highness Sheikh Mohamed bin Zayed Al Nahyan and contains images of diplomatic events, daily life and travel. The photographs were taken between 1968-1978. The collection will be published on akkasah.org.

NYUAD Athletics annual free community event, Ride for Zayed, themed Toward the next 50, returns on December 15 at Hudayriyat Island, Abu Dhabi, in-person for the first time since the pandemic began. The annual event started in 2018 to mark the birth of Sheikh Zayed 100 years ago.

The UAE 50th anniversary celebrations will also include a webpage dedicated to UAE-focused faculty research and a video compilation of Emirati student testimonials. Paying tribute to the 50th anniversary, the NYUAD campus will light up in the UAE’s national colours from 24 November until 2 December.