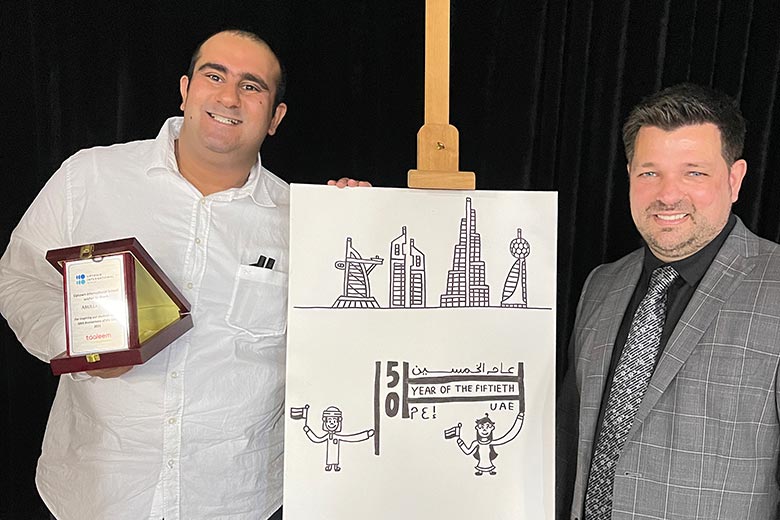 Even in his hometown of Dubai, many people are unfamiliar with his name. Thousands of people, on the other hand, are instantly familiar with his distinctive artistic style – marker ink drawings framed in square pieces that capture humorous takes on everyday life.

Abdulla Lutfi is a young and vibrant Emirati artist who sees and interprets the world in an unusual and original way. Creativity, of course, requires courage, and Abdulla has plenty of that. What’s more, as a person of determination, he believes that his art has a special value to society in that it allows him to convey an often overlooked viewpoint on the world.

It was something of a thrill, therefore, when Abdulla returned to his alma mater, Uptown International School, Dubai, from where in graduated in 2010. And it wasn’t just to say “hello”; he led a workshop for the entire Secondary School, creating a piece of art that led to an online presentation to over 600 students, who were then able to follow his guidance to create a piece of art of their own.

It was a rousing day for everyone, and another very special occasion for Abdulla, who earlier this year appeared in a video announcing the ‘greatest show on earth’ – Expo 2020. Featured alongside some of the biggest names in the Arab world, such as Emirati singer Hussain Al-Jassmi and American-Lebanese Grammy-nominated singer and songwriter Mayssa Karaa, Abdulla was on screen for around 10 seconds where he is shown working on a canvas and walking around the venue, marvelling at the many amazing structures.

Abdulla’s works enjoy a permanent space at the DXB Terminal

Well-known for his astonishing memory, attention to detail, and the spontaneity he brings to his work, Abdulla’s art enjoys a permanent space at the DXB Terminal B as part of a diorama that illustrates daily scenes at the busy airport. He has a couple of sold-out solo exhibitions too and has fulfilled several commissions from hotels, banks and retail stores. Moreover, Abdulla has illustrated a children’s colouring book, commissioned by the Embassy of the UAE in Washington D.C., and also gives speed drawing workshops and demonstrations to schools and other organisations. He is a multi-talented guy – even competing in the Special Olympic World Games held in Abu Dhabi, where he picked up a Bronze Medal in Doubles Bowling.
Abdulla, who was diagnosed with Asperger’s as a boy, continues to grow as a person and as a gifted artist. He aspires to raise awareness and promote inclusion of the special needs community through his artwork and is an inspirational presence for everyone he comes into contact with.

The aim of art is to represent not the outward appearance of things, but their inward significance. And that is what Abdulla achieves … with just a splash of humour to brighten the day.