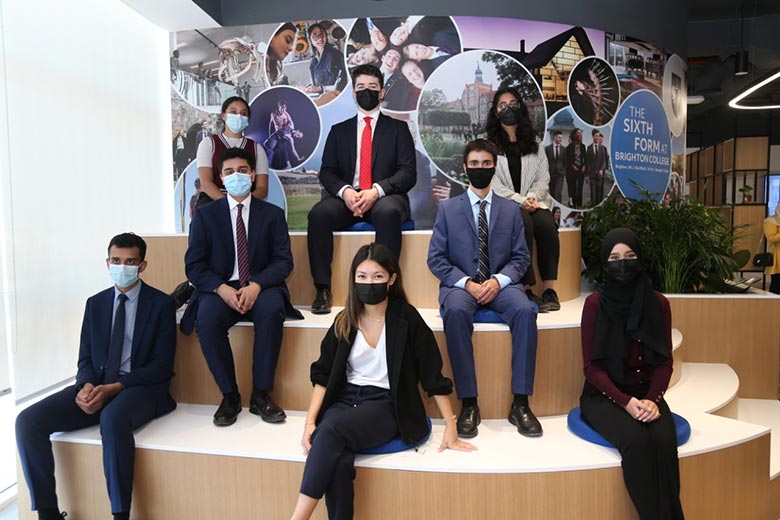 Brighton College Dubai pupils proudly gather in the school’s brand new Sixth Form today to mark the official launch of the facility and the school’s first intake of A-Level pupils. Alongside the British curriculum, Sixth Form pupils will be taught a positive narrative around mental health through the introduction of mental health and well-being studies spearheaded by the Founding Head of Sixth Form, Joe Hall.

Simon Crane, Head Master at Brighton College Dubai commented: “Brighton College Dubai Sixth Form is now officially open and we look forward to the very best traditions of a British independent school education. I am delighted to launch our new innovative and dedicated Sixth Form Common Room, which underpins our ambitious aims. The common room will be a place of success, memories, friendship and leadership. I look forward to sharing the legacy with our pioneering Year 12 pupils.”

Based on the PERMA Model, a scientific theory of happiness, all Sixth Form pupils will study the Brighton Charter, which has been built into the curriculum to teach pupils about character development in areas such as leadership and resilience. It will also teach transferable skills such as; public speaking, presentation skills, problem solving, interview techniques and information and media literacy. Pupils will also learn about positive emotions, engagement, relationships, meaning and accomplishments, and how to apply these to their lives.

Joe Hall, Founding Head of Brighton College Dubai Sixth Form, said: “As the founding Head of Sixth Form, I feel incredibly proud of the fantastic study and Common Room facilities which we are able to offer our Year 12 and 13 pupils. As they look out over the Dubai skyline and form new ideas and shape their own futures, I have no doubt that they will flourish and thrive, and leave us year after year as confident, well-rounded, kind and forward-thinking young men and women.”

Brighton College Dubai Sixth Form adds to Brighton College’s existing outstanding Sixth Forms in Abu Dhabi and Al Ain, which has a proven track record of pupil’s progressing to leading universities around the world. The Sixth Form in Dubai has launched with small personalised classes and dynamic and innovative teaching and is located at the school’s world-class campus in Al Barsha South.

Parents can register their interest and discover more about the Brighton College Dubai Sixth Form by visiting https://www.brightoncollegedubai.ae/ or contact [email protected]